3/15/22: Click here for our hours and latest Covid mitigation procedure

The library is located at 89 Bernard Rd, in the fishing village of Bernard which is part of the Town of Tremont, on the southern tip of beautiful Mount Desert Island, home of Acadia National Park. Tremont is comprised of multiple villages: Bass Harbor, Bernard, West Tremont, Seal Cove, and Gotts Island. Bernard encompasses the southern shore of Bass Harbor, one of few remaining fishing villages along the Maine coastline. Bass Harbor is also home to the famous Bass Harbor Head Light.

The Bass Harbor Memorial Library strives to enrich the lives of Tremont community members and visitors alike by providing access to books, media, and information; promoting a love of reading; and offering programs that celebrate the resources of our community.

The library building has three parts: the main block constructed of brick in 1922, a rear extension framed in wood and built in 1991 (renovated in 2020,) and a circulation area and children’s room, added in 2020. The main block is laid in running bond above a row of soldier bricks laid on the concrete foundation and is topped by a side gable roof. The main facade, facing east, has a central projecting gable-roofed portico supported by modified Doric pilasters and columns. The main wall under the portico, surrounding the entrance, is stuccoed. The wooden door is topped by a semicircular fanlight set in moulded trim. The rear wood-frame additions are more utilitarian, and clad in vinyl siding. The 2019/2020 addition features the large circular “Sunrise Window” and an impressive circulation desk reminiscent of Tremont’s wooden boats, pulling in elements of the original building and the new addition.

The original main entrance (unused now) led into a vestibule, and then a reading room which occupies the entire brick 1922 structure. It has a barrel-vaulted ceiling, and its walls are finished in dark-stained beaded boarding. The rear half of the building houses the library stacks, offices, and other modern facilities.

The history of the Tremont public library begins with a private collection of books made available by Mrs. Vesta McRae, probably from her own home in Bernard. This collection grew to about 1200 volumes by 1920. The 1922 portion of the present building was designed by an unknown architect and was funded by Rhoda M. Watson, a Tremont native who was memorializing her late husband Edwin, an industrialist from Leicester, Massachusetts, and was formally accepted by the town the following year. It is possible that the builder, Charles Lawson, was also its designer; he was Rhoda Watson’s brother. Its construction took place at a time when many public libraries were underwritten by charitable gifts, and when libraries were seen as an important aspect of a community’s educational offerings.

The 2020 addition was funded entirely by generous private donations from Tremont and MDI residents, summer patrons, and private foundations. 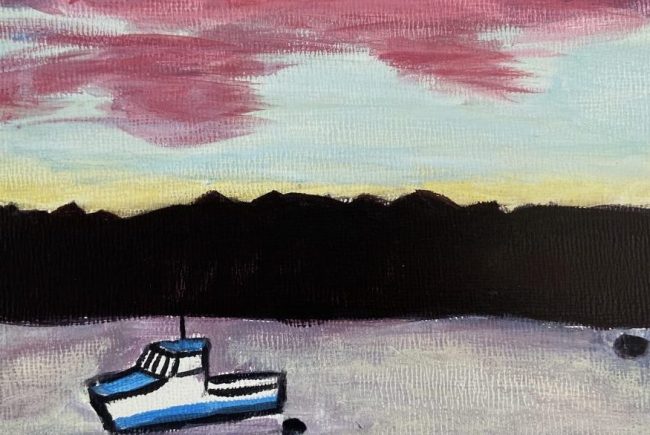 Celebrate the artistic achievements of the Tremont School’s K-8 students at this annual show. Each year, art teacher Chandra Raymond selects pieces from each student in all grades for display at the library throughout May. Reception on May 18 from 4-6pm with refreshments and entertainment by Tremont school jazz musicians.             … [read more]